In this article, we will know about the Best Fiber Broadband Plans under 500. JioFiber, Airtel Xstream, BSNL FTTH are famous internet service providers, they provide the best broadband plans in span India. The most famous plan under 500 is from Jio, JioFiber offers unlimited data and calls in their Rs 399 broadband plan. 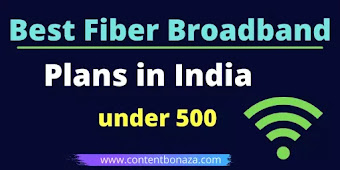 We only mentioned here broadband plans of JioFiber, Airtel, BSNL Bharat Fiber, Excitel because their services are good and they also available in almost all cities in India. We are not including Tata Sky broadband, Hathway, Excitel, You broadband because these give the only region-specific broadband services.

The following below plans offer unlimited internet and unlimited calling to their users. But if you need access to streaming apps then you have to pay more. So let’s check out the benefits given in these plans.

This is the cheapest broadband plan, this Jio Fiber’s Rs 399 broadband gives unlimited data with the speed of 30Mbps, and also gives access to unlimited calling.

You will not get any access to OTT platforms with this broadband plan. The best thing which I like about this plan is that users can subscribe monthly to this plan if they want to try it out. But in other broadband service providers, you have to subscribe to the plan for a year to get an overall reduced price of that plan.

The second most famous plan under 500 is coming from Airtel (Airtel Xstream Rs 499 broadband plan). This plan offers unlimited data with the speed of 40Mbps, unlimited calling benefits and gives access to Airtel Xstream.

Now it depends on you if you are willing to spend Rs 100 more for 10Mbps faster speed. The Rs 399 JioFiber plan providing you 30Mbps speed.

The third famous plan under 500 is coming from BSNL (BSNL Rs 449 Fiber Basic broadband plan). This plan offers 3300GB data with the speed of 30Mbps, after the 3300GB data limit completed then the speed reduces to 2Mbps.

In this Fiber Basic plus broadband plan, you will get 3300GB data with the speed of 60Mbps, after the 3300GB data limit completed then the speed reduced to 2Mbps.

Excited already gives FTTH plans under 500. Excitel Rs 399 FTTH plans start with a monthly price of Rs 399 and provide 100Mbps if you subscribe to their plans for a year. Excitel all fiber-based plans are neither FUP nor data limited, it means you have no restriction.

This Jio Fiber Rs 699 is also a very famous plan, this plan is slightly more than Rs 500 budget but it offers unlimited calls, unlimited data with a speed of 100Mbps and the validity of this plan is 30 days. This plan is a good deal for those who consume data for streaming and downloading purposes.

All the above-discussed plans are available in India and these plans do not have FUP limits except the BSNL FTTH Broadband plan. But if you are getting a better deal from You broadband, Hathway, Tata Sky then definitely go with any one of these telecom service providers.

Now it’ depends on you for which plan who want to go with and for which telecom services provider. If you are still confused and want to know the Best Plans according to the Students, Work from Home, then read this article Best Unlimited Broadband plans for Home and office.

Which is the Best 4G LTE Router in India

Best Plans for Broadband in India, 2021